Emerald City ComicCon Artists; What caught my eye and one review.

Over the weekend I had the privilege of attending the Emerald City ComicCon.  Four days of comics, cosplay, tabletop gaming, and pricey photo/autograph sessions.  The main draw though is the Artist Alley areas where the largest to the smallest comic creators have their booths to meet and interact with their fans.

I took a day and just wandered the alley and photographed anything that happens to catch my eye.  Most artists were fine letting me do my thing.  I had only one artist stop me from taking pictures, which is fine.  In this day and age, I know some have had their work stolen by various "fly-by-night" online t-shirt and print dealers.

As I wandered I formulated an idea of what I wanted to do and this is the result.  A collection of the photos linking back to artist sites where possible with any thoughts and conversations I had at the time with them.

First up is Sheika Lugtu.  Her Cat in a Jar piece caught my eye.

Talking to Sheika she asked me what I liked about ComiCon.  I told her it reminded me of the days when I did collect comics and that I with the last two how much I missed reading the stories and enjoying the art.  She asked me what I used to collect, I said Spawn, Evil Ernie, and before I could continue she lit up all happy.  I continued to list various titles, but she came back to Spawn and related that her favorite comics were Spawn, Hellraiser, and other titles of the same genre.  While that was what she got into art for she found that while in art school she learned that her personal style was more cutesy.

Even so, she did still have a surreal avant-garde artist inside her that wanted out and so she created Theodore. 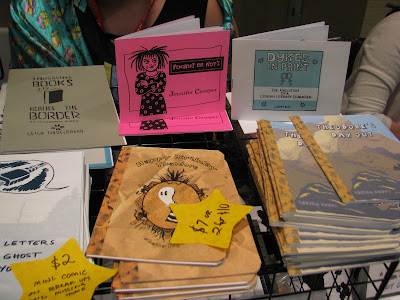 She noticed my press badge and asked about it.  I explained my situation of having worked for NWCN and that while it was off the air I was approved by ECCC for the badge while we were still on and that I was doing my own blog.  Sheika then asked if I could do a big favor for her; review her Theodore books.  I said sure.

In what could be best called a surreal dreamworld, it is Theodore's birthday.  Yet Theodore is alone at home and has run out of cereal bowls.  He leaves the house to look for his parents.  Along the way, he garners the help of some strange and not so strange characters.

The two books remind me of the old "ashcan comics" publishers would make back in the day.  They are simple, almost pamphlet like.  The art here is rough still. Often you can still see sketch lines that weren't fully erased; this lends it a sort of stream of consciousness on top of the odd bizarreness of Theodore's world.  The two books together start Theodore's adventure which I hope Sheika continues at some point since I am curious to see where she goes with it.  I will say it isn't for everyone, it wanders into territory that will make some people wonder what she was smoking or drinking.  Still, it reminds me of those moments when you are just alone with your thoughts near a sleepy haze when the mind takes a step outside reality.

To see more of Sheika Lugtu's work visit her website at sheikalugtu.com

Next up is Ashley Erickson.  We talked a bit, mostly about my beard, but we did chat about her book, "Pets in Armor." 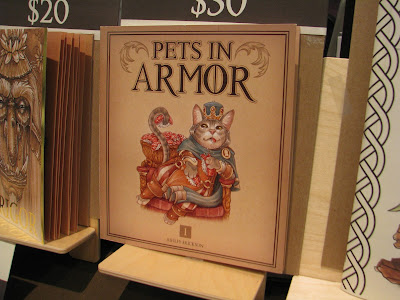 It is an ongoing commission series she is doing for people's real pets.

She seems to have a talent for the storybook apomorphic animals. 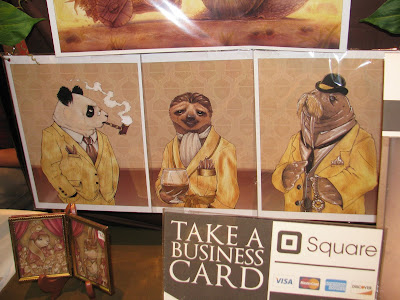 It isn't just "paper and pen" artists that were there.  Chainsaw artistry was on display as well.

His business card is a bit fuzzy so I can't quite make out his name. 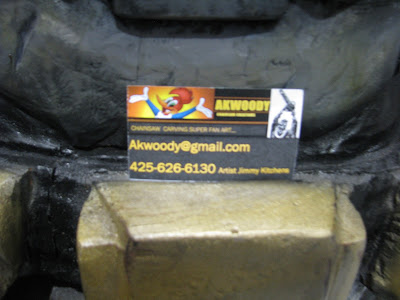 He brought his Superman carving last year and showed me a photo of his Spider-Man carving he did for the Rose City ComiCon.  He also has taken to doing busts.

From here on out most of the artists were either busy with fans, working on sketches, kept to themselves, or I don't remember the conversation.  Still, it is art to enjoy.  For those that have a website, I will post a link with their art.


Check out Jakface's Comic and Tumblr